Not far ago, travel was a luxury limited to a fortunate few who could afford it. Fortunately, travelling – even to the most remote places – is not a luxury anymore. New technologies, cheaper flight tickets, better work conditions, and a significant rise of the global middle class have made travelling accessible to a great deal of the population. As a result, the type of traveller is increasingly more varied ranging from those looking for relaxation in holiday resorts, fine cuisine lovers, art and history enthusiasts, backpackers traveling on a budget, to those looking for the most inhospitable and freakiest places on earth that hardly anybody dares to visit. If you are one of those who wants to stand out of the crowd, any of these destinations may suit you.

Karni Mata Temple or the Temple of Rats, India 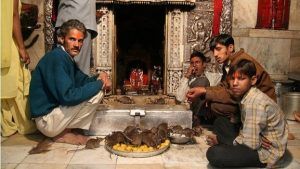 This temple was built in honour of the Hindu goddess Karni Mata in the small town of Deshnoke, in the Bikaner region of Rajasthan, India. Although there is nothing remarkable about its architecture, what attracts most people to this temple are the 25,000 rats that live there. Yep, you read that right. Thousands of pilgrims and curious alike visit this temple every year to either pay respects to these frequently despised rodents or see with their own eyes how these holy animals drink from the bowls of milk they are provided with every day. Worshipers of Karni Mata believe that these rats are the reincarnation of their ancestors, and for this same reason, visitors to this temple must be warned about the importance of respecting the animals as any kind of mistreat might be considered a major offence by the devotees.

The Darvaza gas crater or the Door to Hell, Turkmenistan 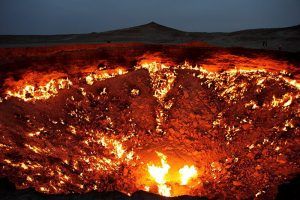 If rats are not your thing, the Door to Hell – as it is most commonly known – might be more appealing to you. This gas crater, located in the Turkmen desert of Karakum, has been in flames since 1971, when it was paradoxically set on fire to prevent a major catastrophe. However, what they did not expect was that almost 50 years after it would still be burning. The view of this enigmatic spot is specially fascinating at sunset when most visitors gather around the hole. Tours usually include overnight camping by the crater, a barbecue dinner and a trip to some nearby villages.

The Island of Dolls, Mexico 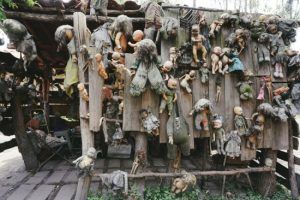 Although Julián Santana never meant it to be a tourist attraction, the truth is that the Island of Dolls in the south part of Mexico City is becoming increasingly popular among many curious travellers. Broken and severely damaged dolls can be found hanging all over the place creating a truly terrifying scenario. These were originally placed by Santana, the former owner of the island, claiming that this would guide the wandering spirit of a little girl who had drowned in its waters. Despite the fact that there are no clear reports about the veracity of the story, it became even creepier when Julián himself drowned in the same place in 2001. If you have not abandoned the idea yet, you must know that visiting the island is not an easy task and you will need to arrange the journey by yourself.